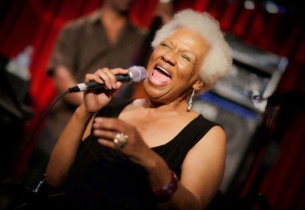 Celebrating Barbara’s Birthday has become a fun Sunset Jazz tradition. Barbara continues to dazzle music lovers worldwide as she delivers rich, unique, soulful and highly spirited interpretations of Jazz, Blues, Gospel and Pop songs.  Always an advocate for others, Barbara opened the Barbara Morrison Performing Arts Center in the historic Leimert Park district of LA in 2010, followed by the California Jazz & Blues Museum, the first such facility in the state which showcases photos of jazz & blues artists, inspired art plus offering lectures and performances by many prominent musicians, including Barbara herself!  She continues to be an inspiration to so many, as she overcomes her battle with diabetes with great courage and determination. Joining Barbara will be the Peak Experience featuring Mike Peak (bass), Ron Kobayashi (piano), Kendall Kay (drums) plus Rickey Woodard (tenor sax).

Tickets & Info.;  (949) 759.5003 or go to:  sunsetjazzatnewport.com.  You may also secure seats by using this email address:  westcoastjazzparty@att.net